The Federal Emergency Management Agency (FEMA) has terminated grants awarded to UC Berkeley in January 2016 that were to fund fire hazard mitigation projects in the area known as the Hill Campus.   Copies of the letters communicating the termination are available through the links below.  The campus was not consulted regarding the decision to terminate the grants and has no information regarding why the grants were terminated by FEMA other than what is stated in the letters.

FEMA has stated that as a result of its termination of the grants, no federal action is associated with the fire hazard mitigation projects and therefore the Incidental Take Statement issued by the US Fish and Wildlife Service (USFWS) no longer covers the activities that were to be carried out pursuant to the terminated grants.  If USFWS formally concurs with FEMA’s position, then the USFWS may not issue a new permit enabling the University’s fire hazard mitigation work for months or years.  The campus is presently evaluating how to address compliance with USFWS jurisdictional requirements in light of FEMA’s decision to terminate the grants. The UC Berkeley’s Hill Campus Fire Hazard Reduction Program work will be delayed for an indefinite period while the regulatory issues arising from termination of the grants are resolved.

The grants were awarded after approximately eight years of consideration and review by FEMA, including FEMA’s preparation of an extensive Environmental Impact Statement. The campus was preparing to begin work in Claremont Canyon in mid-September; the contractor bidding process was completed in August 2016, and contracts were expected to be finalized by September 16.

The campus’s annual program to create and maintain limited defensible space by reducing wildfire fuels in the Hill Campus is not subject to the grants terminated by FEMA and this year's work is scheduled to continue through September 2016.

Further updates to the UC Hill Campus Fire Hazard Reduction Program work plan will be posted on this webpage.

UC Berkeley has finalized an Addendum to the UC Berkeley 2020 Long Range Development Plan Environmental Impact Report, examining the fire risk reduction work to be undertaken in the Hill Campus.  Click each link to download the associated file:

Notice of Determination approving the project.

As described in the Addendum, the Hill Campus Fire Risk Reduction work has been extensively described and analyzed both in the UC Berkeley 2020 Long Range Development Plan and in an environmental impact statement prepared on behalf of the Federal Emergency Management Agency (FEMA) and approved in 2015 (To see The East Bay Hills EIS for Fire Risk Reduction, click here).
In accordance with CEQA, an addendum need not be circulated for public review.  Nonetheless, a draft of the Addendum was circulated in March 2016.  The final Addendum incorporates responses to comments received.  See Section VIII.

UC Berkeley manages approximately 800 acres in the hills east of campus, an area referred to in the campus 2020 Long Range Development Plan as the “Hill Campus”.

The most dramatic physical feature of the Hill Campus is Strawberry Canyon, a watershed of roughly one square mile drained by the south fork of Strawberry Creek. This water supply helped convince the trustees of the early College of California to acquire the ranch lands along the creek in 1868 as the site for their new campus. At the time, the hills above the campus were a mix of grassland, oak savannah and open chaparral. It was not until speculators in the next decade planted eucalyptus, in a failed scheme to grow and harvest them for commercial use, that the hills began to acquire their present, largely forested look.

The mix of scrub and conifer and eucalyptus stands makes the East Bay Hills a regular seasonal fire risk. This risk becomes particularly pronounced during the periodic one- or two-day shifts from the normal northwesterly winds to ‘Diablo’ winds blowing in from the warm, dry regions to the east. 20th century Diablo wind fires have burned over ten times the acreage of normal wind condition fires, and include the firestorms of 1923 and 1991.

In partnership with other agency members of the Hills Emergency Forum, UC Berkeley maintains an ongoing program of fire fuel management in the Hill Campus to reduce fire risk to the campus, LBNL, neighboring residents, and recreational visitors to adjacent park and watershed lands. While the treatment used in a given area must be customized to address its specific conditions, including vegetation type, access, and proximity to roads and structures, in general the treatments are designed to meet one or more of the following goals:

In early 2015, nine or more years after the grant applications were submitted, FEMA approved the Strawberry and Claremont Canyon projects as outlined in extensive environmental documentation, closely coordinated with regulatory agencies. The Frowning Ridge project was fully analyzed in the EIS but deemed ineligible for funding because some fuel removal work was undertaken by the campus prior to FEMA's determination. See https://www.fema.gov/media-library/assets/documents/10041

The campus has its own Fire Mitigation Committee, chaired by Professor Scott Stephens(link is external). 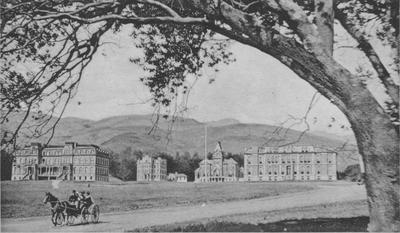 Questions about UC Berkeley's fire hazard reduction program and work should be directed to Greg Faulkner at gfalkner@berkeley.edu or 510 664-7096.